Nissan has awarded Eaton the “Global Innovation Award” for their TVS® supercharger technology. Eaton’s TVS unit manufactured for the Micra has helped Nissan reach targets for fuel economy and performance. The award was given to Eaton at the annual “Nissan Global Supplier Meeting“. Six other companies also received the award.

Eaton’s manufacturing facility in Athens, Georgia, which produces the TVS Supercharger for the Jet Ski Ultra 300X, has been awarded the 2013 Kawasaki Quality Award. This is the second year in a row that Eaton has won the award. Kawasaki Quality Awards are based their “Supplier Report Card Score” which factors in Corrective Action Requests … Read more

It takes a bit more than the standard supercharger kits to get a horsepower monster like the RDP Challenger SRT8.This Dodge is pushing out 1000 HP running a one-off custom twin supercharger system. 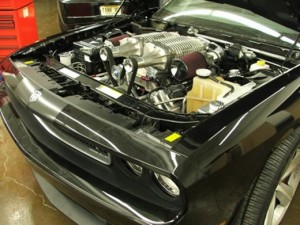 Early in 2009 the RDP Challenger took the title of World’s Fastest Late Model Challenger by running 10.24 at 133 MPH. Later they bested that run and reached their goal of a single digit quarter mile with a 9.79 at 144 MPH. The RDP Challenger also had a record for most powerful late-modern Hemi.

To push the 2010 SRT8 Challenger to these extremes RDP had to do some custom work on it. Here’s some of the specs:

Since then RDP has released an updated version of the Challenger running twin turbos on a 426 SRT8 that is reportedly pushing out 1,300 RWHP.

Here’s some great videos of the RDP Challenger:
Running:

Toyota Racing Development (TRD) is Toyota’s in-house performance development and tuning division for Toyota, Lexus and Scion vehicle lines. At the time of writing there are two main divisions of TRD: Toyota Technocraft Co. Ltd or TRD Japan (established June of 1954) and TRD U.S.A. (established in 1979). TRD Japan was originally known as Toyota Sports Corner (TOSCO). In December of 2006 TRD officially expanded into Thailand with TRD Asia Co. Ltd. which was a new corporation made up with 80% shares owned by Toyota Technocraft Co., Ltd. and 20% by Toyota Tsusho Corporation. In August of 2007 Toyota Australia established TRD Australia which offered the first TRD production vehicles. Unfortunately the production was officially brought to a halt in March of 2009. Beyond superchargers TRD offers several optional and aftermarket performance parts including headers, mufflers, suspension parts, braking hardware and much more.

TRD has been in the business a long time and has an established reputation. Along with the quality that is expected of Toyota vehicles comes TRD’s outstanding professional racing results for both cars and trucks. They have a long list of participation coupled with impressive achievements. A complete list of achievements is beyond this article but to get an idea of just how deep their racing roots are we’ve included a list of series and racing leagues they have participated in:

A couple of noteworthy achievements: TRD was the first to factory fit an Eaton TVS supercharger in a production car with the 2008 TRD Aurion. Also, in 2000 Toyota was able to grab a CART win with a TRD built engine. This was the first American built engine to win an Indy race in 20 years. Using that same design by 2002 they were able to take the Indy Series Championship.

Unfortunately, in 2015 Toyota discontinued support for the TRD Supercharger program. The majority of their offers were Roots type but they also had a centrifugal compressor for the Scion.